Please note: Apple varieties change throughout the season so call for updates 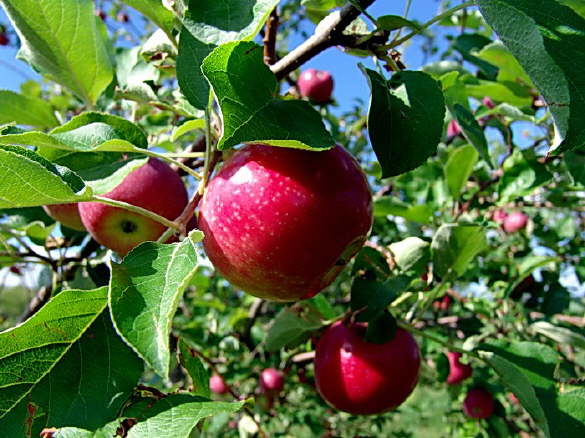 PAULARED Good for fresh eating, pies and sauce. It’s ready a week after Jersey Mac. An early maturing red fall apple. It has a tart flavor and keeps well. We can ship this apple in gift packs until early October. Paulared was a chance seedling that was discovered in Sparta, Michigan, and introduced in 1967.

McINTOSH The most popular New England apple. If harvested and stored well, it is tender-crisp and a delicious mixture of sweetness and tartness, good for eating and cooking. We have these available for shipping in gift packs from the middle of September until we run out of apples sometime in the spring. The McIntosh is a chance seedling that originated about 1796 on the farm of John McIntosh in Dundela, Ontario. Many redder strains have been developed since them. We grow several of them, and all have excellent flavor.

PRIMA Very crisp and tart. An excellent eating apple. A scab resistant variety, we have just a few trees that were planted for evaluation. Production is low and they require multiple pickings and do not keep well, so no more were planted. We sell the few that we harvest in our retail store. Prima originated from a cooperative disease resistance breeding program involving Purdue University, Rutgers University, and the University of Illinois and was named in 1970.

CORTLAND A favorite cooking apple which is also excellent for fresh eating. A red apple, it has a very white flesh that is slow to brown and so is a good choice for salads. Available in gift packs starting the last week in September, and until we run out in midwinter. The Cortland is a Ben Davis x McIntosh cross which was named in 1915 by the New York State Ag. Experiment Station in Geneva, New York.

SPARTAN Dark red, almost purple, firm and sweet with just a hint of tartness. Noted for its eating quality but also a good pie apple. Available in gift packs from late September until Christmas. The Spartan is a McIntosh x Yellow Newtown cross named in 1936 by Agriculture Canada, Summerland, British Columbia.

MACOUN A real treat with many fans. Extra crisp and sweet. An excellent all purpose apple but so good to eat that we can never seem to spare any for cooking. Dark purple with corners. Available in gift packs from the end of September until we run out in early November. Macoun is a selection from a McIntosh x Jersey Black cross and was named in 1923 by the New York State Agricultural Experiment Station at Geneva, N. Y.

RED DELICIOUS Hard and sweet. The apple with the 6 bumps on the bottom. Because its taste improves in storage, it seems to be at its best in time for Christmas. Good for fresh eating and salads. Not recommended for cooking. Available in gift packs from early October until we run out sometime in January. Delicious originated as a chance seedling in Iowa in the late 1800s and was named in 1895. Redder strains have been developed since then, but the flavor has not improved as much as the color.

GOLDEN DELICIOUS Sweet and juicy with some tartness. An excellent all purpose apple. Available in gift packs from mid-October until we run out around Christmas time. Golden Delicious originated in West Virginia as a chance seedling. It was introduced by Stark Brothers Nurseries in 1916.

Newer Varieties (for us)

Young trees are beginning to bear the following varieties. Quantities are small, but we have enough for our retail store, the pick-your-own customers, and usually still have a few available for gift packs. These varieties are usually all sold out by mid-December.

One of the new dense tasty apples developed in New Zealand. A firm crisp juicy red apple with a sweet and mildly aromatic taste. Gala is a cross of Kidd’s Orange x Golden Delicious introduced in New Zeland in 1960. Redder strains have been developed, but the flavor has been retained.

A sweet, tasty apple that is firmer, darker colored, and a little smaller than McIntosh. An open-pollinated seedling of McIntosh (strongly felt to be a Red Delicious x McIntosh cross) selected by the NYS Ag. Exp. Sta. at Geneva, N.Y., and named in 1966.

A large, firm, orangish-red, sweet-tart apple with juicy crisp flesh. Jonagold is a Golden Delicious x Jonathan cross named by the New York State Agricultural Experiment Station at Geneva, N. Y., in 1968. Jonagold has become a leading variety in Europe and is currently gaining in popularity in the U.S.

A large, firm, orangish-red, sweet-tart apple with juicy crisp flesh. Jonagold is a Golden Delicious x Jonathan cross named by the New York State Agricultural Experiment Station at Geneva, N. Y., in 1968. Jonagold has become a leading variety in Europe and is currently gaining in popularity in the U.S.

An excellent, dense, juicy eating apple maturing in late October. Greenish yellow with a faint reddish blush when ripe. A very large apple that is hard to put into gift packs because of its size. The Mutsu is a Golden Delicious x Indo cross named in 1948 by the Aomori Apple Experiment Station, Kuroishi, Japan.

A fine older variety with a slightly tart flavor. A traditional pie apple, but many like to eat it fresh. We have a very few of these for sale in our retail store. Northern Spy originated as a chance seedling around 1800 (some say 1874) in an orchard in East Bloomfield, N.Y.

A medium size, about 1 to 1 1/2 inches in diameter, scarlet red crabapple, used for jelly or to make spiced crabapples. It makes a deep orange colored flavorsome jelly. We sell jelly we make from these crabapples at our retail store. We include this jelly in selected gift packs and also ship it by itself on request. A few people have us ship them a few pounds of crabapples so they can make their own jelly. Its origin is unknown.

We are closing the barn store on October 31 (Halloween).
We will still have apples and cider till Thanksgiving – Please call 207 453 7656 for availability.