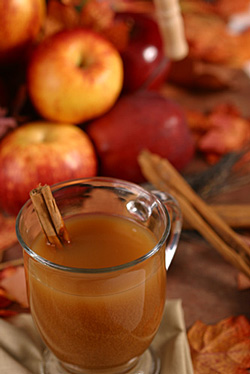 This starts in late August or early September. Although many varieties are grown, McIntosh is the most important commercial variety in Maine. It is known nationally and it does better in our Northern climate than it does further South. We have just three weeks to pick McIntosh before there is a significant loss to drop. Labor to harvest the apples is provided by local people and workers who come from far away. Many are brought in from Jamaica and some come from Mexico. Experienced skilled workers are very important because pickers make the difference between a bushel of apples fit only for processing and one graded as extra fancy that may sell for eight times more than processing apples.

The intensity of the short harvest season is hard to imagine unless one has experienced it. The pickers work eight hours a day seven days a week during good weather, while the support crew works about 10 hours daily. This crew includes the foreman, quality checkers whose job it is to make sure that the apples are picked carefully and not prematurely before enough red color has developed; record keepers whose job it is to record the hours worked and the amount picked by each picker, and tractor drivers who move the wagons hauling the apple bins through the orchards while they are being filled by the pickers and drive them to the apple store when they are full. By the end of each days work, all apples picked that day should be in refrigerated storage rooms being cooled. Prompt cooling after picking increases storage life.

The first apples picked are put into special cold storage rooms which are nearly airtight when sealed shut. These special rooms are called controlled atmosphere storages because the oxygen in the room is reduced to between 3% and 5% and the carbon dioxide is kept within a similar range. The temperature is kept at about 36F for McIntosh and 32F for Red Delicious. The room’s atmosphere is tested daily and the normal air is let in through a port if it gets to the lower limit of the allowed amount. Since apples use oxygen and give off carbon dioxide, limiting the amount available slows the ripening process, but it also means the amount can get too low if not checked daily. These specially stored apples are destined to be marketed later in the year, from December on. The later picked apples, are riper and more flavorful but will not keep as well. Therefore they are marketed first and kept in refrigerated rooms that are not sealed. They are stored at 32F. These apples are referred to as cold storage or regular storage fruit.

Unless apples are sold directly from the orchard through a “pick your own” operation, they must be graded or sorted according to a quality standard that conforms to state and federal law. They are generally stored just as they are picked, and then graded and packed as orders are received for them, shortly before being marketed from a retail operation on the premises or before being shipped to supermarkets for resale. Grading, packing, and shipping of apples goes on from a few weeks to 12 months depending on the size of the orchard and the manner of marketing the orchard uses. Some orchards have the facilities to store, grade and pack all their own fruit. Others have all or part of their crop stored and packed by a cooperative facility.

After harvest, there is still work to be done before winter arrives. Any equipment left in the orchard needs to be collected and put under cover. Sprayers and tractors that will not be used until next spring need to be made ready to withstand freezing temperatures and stored for the winter. Tree limbs broken by too heavy a fruit load need to be sawed off. One last mowing is done to keep the grass from providing too much cover to rodents. The main rodents that apple growers are concerned with are voles that will eat apple bark at or below ground level girdling a tree and thus killing it. Damage is limited by reducing their numbers by an application of poison bait after harvest, by trying to make the orchard habitat unattractive to them, and by protecting the tender bark of the trunks of young trees with guards of various types, and by cheering on the predators. We like foxes and coyotes.